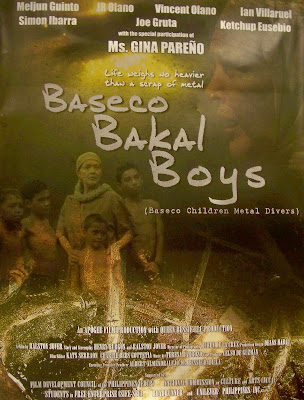 Riding through the streets of Metro Manila, an observant commuter will notice something amiss. Once in a while, manhole covers on the streets and steel railings from flyovers disappear. Blame it on the rising number of desperate bakal men and boys. Several of them filch and steal every possible metal scrap they can lay their hands on. These items will later be sold at dishonest junk shops.
Bakal Boys starts with a pair of kids, Utoy and Bungal, running away from a security guard. They have just stolen some metal scraps from a ship. Just when the security guard comes close to apprehending the pair, the duo dives into the polluted waters of Manila Bay. Most of the time, though, Utoy and the other kids get their scraps the hard, legit way. The poor kids scour the dirty waters looking for metal pieces. They are expert divers because they live in the nearby Baseco compound in Tondo.
Director Ralston Jover utilized real-life children metal divers from the slum area of Baseco. The film takes a look at how they go about doing their work. The brazen way in which the kids take to the waters is simply unnerving.

Like a well-coordinated platoon of soldiers, they pursue their mission of retrieving an anchor with aplomb. Each one of them has a respective task to do. The divers plumb the murky depths. Some cook rice. A few youngsters fetch a banca for their ride back to the compound. The junk shop owner shortchanges the group. The kids can not complain because of the owner's threat of charging them with theft. After settling the transaction, the kids realize that one of them is missing in action. The loss of Bungal becomes a catalyst for the redemption of Utoy.
Bakal Boys does a neat job of essaying the lives of children metal divers. Jover's direction is generally good but some scenes with the kids are stagey. The junk shop scene shows the kids scratching their heads in unison. There are also scenes in which the kid actors anticipate their dialogue cues.

Nevertheless, Bakal Boys is a remarkable debut feature film. It may not be on par with the 'real-time' films of Brillante Mendoza and Jeffrey Jeturian but it is better than most mainstream films out there. Jover has the chops to make excellent films in the future. His earlier movie, Marlon, won the best documentary award at the 10th Cinemanila International Film Festival.

If you want a more insightful look at children metal divers, then check out the short film Batang Pier. The documentary film, directed by La Salle students Camille Adraincem, Paola Recuenco, and Michelle Saquido, examines in depth the problems and aspirations of the young metal divers of Manila's South Harbor.
Posted by Film Angel at 9:16 PM