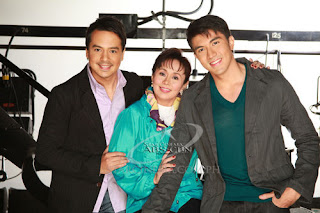 Vilma Santos chose this as her comeback film in lieu of Raya Martin's Independencia. The latter film is among the best films released so far this year, while In My Life will soon be forgotten after the media hype whimpers down.
The blurbs boldly scream... Passionate scene of John Lloyd Cruz and Luis Manzano! Acting showdown between Cruz and Vilma!! 16th Anniversary Presentation of Star Cinema!!!
The prolific production company should have selected a better story for the triumvirate of Vilma, Cruz, and Manzano. The movie starts with Noel Villanueva (John Lloyd Cruz) worrying about the impending visit of his lover's mother. Shirley Templo (Vilma Santos) is a cranky librarian and former physical education teacher, who belatedly visits her birth country, the United States of America. She hesitantly goes to New York City to stay with her son, Mark Salvacion (Luis Manzano). She learns soon enough that Mark is living in with Noel.
The film shows New York City as a place where everyone is free to choose his/her lover, regardless of looks, race, and sexual orientation. The non-Filipino actors were surprisingly good. They really seem to be residents. Heck, they probably are city residents. However, I'm bothered with the film's depiction of the city's dark side. It shows an African-American harassing Shirley.
Luis Manzano has a memorable scene with his mom, Vilma. The picnic scene shows Mark with Shirley. They have a one-on-one talk about how Shirley began to distance herself from Mark because of his sexuality. Manzano was so gay-ingly good in this scene. He did not portray Mark as the swishy type but is still convincing as a homosexual. Manzano will figure in another memorable and well-directed scene. Nope, it is not the passionate scene but the one involving him and his preoccupation with his cellphone.
The much-hyped passionate scene is a dud. If you blink, then you will probably miss it. The beautiful shot before the kissing scene is the one that should have been talked about. We see Noel hugging Mark while a tear drop rolls down his cheek. Now, that is a passionate person who is very much in love!
There are directing and script flaws that bother me. The travelogue scenes diminish the impact of the fish-out-of-the-water concept. The initial scenes give the impression that Shirley is very much adapted to the city. Also, Shirley is not a bumbling moron. She is an educated person and a librarian at that. The wacky scenes are completely out of line.
The film seems to be about how a mother comes to grips with her homophobia. Well, it turns out, that she is not only distant to her son but also to her two daughters. She is not homophobic. She is plainly a bad mother. How she ended up being a bad mother was not tackled at all. The film was so caught up with other topics such as marriage for convenience, and gay couples that it forgot the major topic.
Director Olivia Lamasan wasn't able to repeat her magic in Sana Maulit Muli. Her latest film is an acting showcase for Manzano and Cruz. Sadly, it is hampered by a cluttered story. There are better films released out there. Showing at indieSine is Jerrold Tarog's technically-competent Mangatyanan. And, there's the magnificent Independencia, which will have its last screening at the UP Cine Adarna on Saturday (September 19) at 1:00 pm. See the excellent movie that Vilma rejected as her comeback film.
Photo from Star Cinema
Posted by Film Angel at 8:16 PM