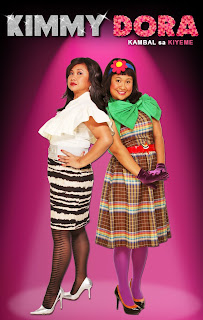 So far, 2009 has been a decent year for excellent, widely popular comedy films. These include the Sine Direk standout Ded Na Si Lolo by Soxie Topacio and the Cinemalaya Best Picture winner Last Supper No. 3 by Veronica Velasco. The latest funny romp is Kimmy Dora, a much-awaited return to form of director Bernal.

The petite filmmaker collaborated with some of the best people working on the film industry. One of them is actress Eugene Domingo. Restricted mostly to being sidekicks in movies, Domingo can easily upstage the leads with her excellent thespian skills. Equally adept in dramatic and comic roles, she can evoke empathy because of her ability to get behind the skin of her character.

In this laugh-out-loud film, Domingo portrays not one but two widely diverse characters, Kimmy and Dora. Borrowing some tricks from Michael V, Domingo uses intelligent characterization to limn out differences between the identical twins. Kimmy Go Dong Hae is a confident tycoon with super-genius intelligence. A bout with typhoid fever during her childhood transformed her into a hot-headed person. Dora is the younger twin whom everyone loves. However, she doesn’t have an iota of business acumen. In fact, she is a mentally-challenged person. A rift begins to form between the twins when Kimmy’s crush, Johnson (Dingdong Dantes) starts to woo Dora.

Writer Chris Martinez played a big part in helping Domingo bring out the laughs. A plethora of witty one-liners, sophisticated adlibs, and brusque slapstick by Kimmy keep the audience in stitches. However, the outrageous fish-out-of-the-water situations involving Dora were the ones that brought the house down. Dora’s impersonation of Kimmy is a hilarious tour-de-force by Domingo. The tongue twister lesson with Regine Velasquez is a hoot!

The future looks bright for the local comedy scene. The rise of Domingo as a comedy star is a welcome development. But, along with discovering new lead comedians, the industry needs to nurture and develop scriptwriters who excel in comedy. Also, Binibining Bernal should focus more in directing comedy films. Making people laugh is really her forte. Kimmy Dora is the best proof of her comic touch.
Posted by Film Angel at 8:41 PM