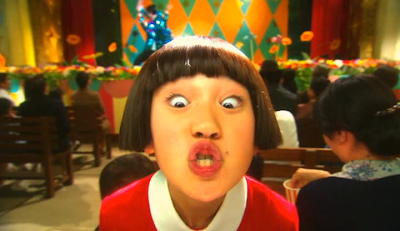 Bless her poor soul. All she ever wanted was to do right by her loved-ones. All she ever did was to give a part of her self with little expectation of reward. But hers was not a perfect world. Life would boomerang on her despite her best efforts. This, in essence, is the sad trajectory of Matsuko's worldly existence.

At first blush, it seems like a subject matter meant solely for a downbeat film. Memories of Matsuko, however, manages to achieve a more complex feat, a more multifaceted and more polyphonic film than might appear on paper. It tones down the tragic in favor of a hyper-realistic portrait of the comic and the dramatic. It’s a movie that tries and succeeds in not playing it straight and yet retains the sad eventfulness of its heroine's story. Oscillating between its evocation of humor and pathos in 127 minutes of sheer emotional push and pull, it aims true for the heart.

We learn about Matsuko, however, by second hand and in flashbacks. By the time the film begins, she is a box full of ashes. Her nephew Shou, a directionless youth, has been tasked by his father to clean out his dead aunt’s apartment. Shou hardly knew her. Yet in death, Matsuko might just affect the tenor of his disaffected life.

Matsuko’s fall from favor is rooted in childhood -- her father rejecting her in favor of her sickly younger sister -- but culminates when she protects her high school student who is suspected of theft. She takes the blame for it and is discharged from her duties in dishonor. Her family, most especially her father whose approval Matsuko seeks, disowns her.

Thrown out of the family, Matsuko rebounds from one abusive relationship to another, as she looks for companionship that has long eluded her. Almost all her lovers, however, prove to be wrong choices: There’s an aspiring but heavy-handed writer who takes his own life, a married man who is simply jealous of the writer, a pimp, a yakuza thug who is as fearsome as his tattoos. When she seems to have found the right man, she is thrown into jail for a crime she has been running away from.

Finely balanced between comedy and drama, Memories of Matsuko is leavened by pop tunes and musical numbers whose lyrics are relevant to the moment and the fate of its heroine. It’s a film that mixes tone in just the right proportions and emerges as both entertainment and as serious meditation on a life tracing a downward spiral.

The life of Matsuko is pretty much the stuff of soap operas – only her life seems without payoff and redemption. The film, however, never faults her for her ill-advised decisions, although there is a lot of them. Prostituting herself? No. Murdering her lover? No. Refusing help when she most needs it? No.

This is the achievement of Nakashima’s film: Matsuko remains sympathetic all throughout despite her flaws. Memories of Matsuko feels neither too oppressively heavy nor too insistent on pulling at our heartstrings – at least not until the end. We are simply dazzled by the visual sumptuousness on the screen, the gloss and the crisp, rich colors that recall the best color movies (Gone With the Wind is one of the conscious references.). We are likewise diverted by the many incarnations of Matsuko, as well as the colorful characters that she meets: her shady jobs, the porn actress, the suicidal writer, the yakuza gangster, her bedridden sister, the boy band.

As her murder unfolds at film's end, the bittersweet irony clarifies: Matsuko has genuinely touched a few lives, even those who could only respond with treachery. When it's all over, there is but a single abiding image: her face and lips puckered at us, a woman not ashamed to make herself look silly just to make our day.

Posted by Northern Portrait at 7:15 AM