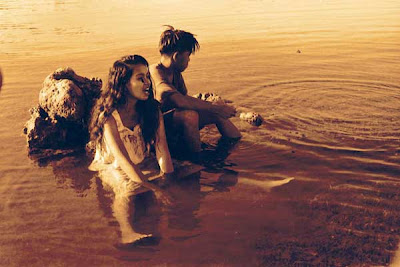 October 24, 2009. Several malls observed United Nations' Day by holding events. Some of you may have celebrated their birthdays or anniversaries on that day. For a dozen or so moviegoers at Fully Booked's U-View, they spent half of that special day watching Lav Diaz's majestic story, Evolution of a Filipino Family.

It was a mini-celebration of United Nations' Day at U-View. An award-winning Filipino filmmaker, a Filipino-Chinese film critic, a Filipino-Japanese female scriptwriter, a middle-aged Caucasian male, and a smattering of local cinephiles patiently sat through the 11-hour epic film.

11-hour film!?! Who would have thought of doing that?

Evolution of a Filipino Family is epic storytelling at its best. Only a genius like Lav Diaz can consistently create films that are more than 5 hours in length, and win acclaim and awards in the process. This film is Diaz’s response to Lino Brocka’s dictum of creating films for fellow Filipinos. It is a film in which local moviegoers will identify themselves with the aspirations and travails of the Filipino family.

The story initially focuses on a rural family. Three female siblings take on farm jobs because their father was incarcerated for theft. As the film progresses, we get to know of two more families. There is the family of treasure hunters in Benguet. A father and his adopted sons try their luck looking for gold. The third family is a fictional and dysfunctional one. The radio-based family is made up of a lecherous stepfather, his wife, and his stepdaughter. Just as the family of treasure hunters keeps track of a favorite radio program, the audience also anticipates the continuing drama and adventures of the three sisters and the gold prospectors. The storytelling is so intense and gripping, you will not notice the minutes quickly passing by.

Lav Diaz utilized various tricks to keep the audience wide awake. He inserted footages of voice talents doing work for a melodramatic radio program. The loud, booming voices and emotional faces keep the audience enthralled. There are also footages of grave political mistakes captured on video. Watching this film is probably your only chance to see unexpurgated video versions of the Ninoy Aquino assassination and the Mendiola massacre of farmers in 1987. These powerful footages were stunning.

But, ultimately, the harrowing tales of the families are the ones that will keep the viewers glued to the screen until the end. There is a killing here and a massacre there. There are incarcerations. And, then, there are those family reunions. There will be a happy ending for one family and a sad ending for another family.

As the end credits roll on, the cinephiles lingered. When the lights came back, a spontaneous, overwhelming applause erupted in the small room. The audience obviously loved the film. Almost half of the attendees that night came back the next day to watch another Lav Diaz film, Agonistes. That is the effect of a Lav Diaz film. Once you've seen an epic film by Diaz, you'll be begging for more.

Evolution of a Filipino Family is a highly recommended film. It may have a problem with synchronized dialogues but it is a film worth celebrating and worth allotting 12 hours or so of your precious time.

The Cinemanila group must be commended for exhibiting three Lav Diaz films during the festival in October 2009. Now, the question on local cinephiles’ minds is ‘when is the much-awaited screening of Batang West Side?’
Posted by Film Angel at 10:28 PM