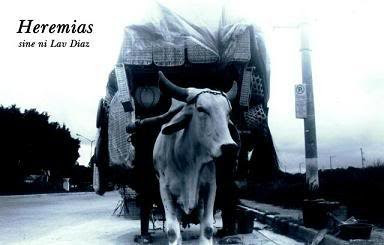 The nine-hour epic is my pick as best Filipino film of the 2000s. It has a great start (probably the best initial two hours of a Lav Diaz epic), and a great cliffhanger of an ending. In between are amazing images and captivating stories. The tale of a Japanese straggler and the legend of the scary lizard deserve to be turned into separate films. Credit must also go to Ronnie Lazaro's excellent performance as Heremias.

I love this Malay time-inflected film! It is a joy to see such laid-back film with lots of extended takes. French film critic Andre Bazin remarked that a long take allows viewers to settle on the shot and gives more freedom as to where to look. The freedom given to viewers is exhilarating. There is a danger though of viewers tuning out or growing restless.

The first hour sets the pace of the film. It consists of several 10-minute or so long takes. The static shots focus on a handful of Brahman bull-drawn carts traversing a highway. The somber black and white cinematography enthralls the moviegoer to take a meditative look on the swaying grass blades and the zooming motor vehicles overtaking the carts. The lushness of the ambient sound enhances the contemplative experience.

The film slowly lures us into the unhurried world of roving handicrafts vendors. I enjoyed this segment of the movie. Director Lav Diaz reveals beauty in the routine activities of the joyful vendors and their families. The local adaptation of the children’s song ‘Where is Thumbkin?’ has never been sung with much gusto as in this film. Songs, stories, food, and liquor figure prominently in the world of close-knit villagers. Eating and drinking become main occasions of communal life. The drinking sessions in particular are not only entertaining but flesh out the characters.

The titular character, Heremias, seldom joins the men on extended drinking sessions. Thus, he ends up being the butt of stories. The elder of the group advises the men to just mind their own business and leave Heremias alone. During the course of the trip, Heremias chats with the elder. He wants to veer away from his companions. Despite friendly warnings about possible mugging and the prospect of running straight into a supertyphoon, he defiantly changes course and chooses the less-traveled road.

There is a shot of the white Brahman bull plodding through the bumpy, rough road as seen from the eyes of Heremias. From that point on, the film shifts gear and thrust the viewer into the point-of-view of Heremias. The willing viewer gets to see and hear what he is experiencing.

Contemplative moments abound in this film. There is a majestic, meditative scene showing a seated Heremias wading in the middle of a river. He is looking at a distant mountain. This scene prefigures a similar scene of a young Heremias looking at the Mayon Volcano in Book Two of Heremias. These meditative moments compel the viewer to ask what is exactly bugging the problematic merchant.

Slowly, the character of Heremias comes to light. A dark deed in the past continues to hound him. Random encounters with people inevitably remind him of his past. Their tales allude to his dark side. However, his bouts with contemplation and a strong typhoon wash away anger in his heart. He withholds at the last second his plan to kill a suspected thief.

Heremias seeks out the person/s responsible for the theft of his goods and his bull. Just as night falls, a group of young people holes up in his stakeout place. What Heremias (and the viewer) will see and hear for the next hour is disturbing enough to make people walk away. Try to imagine seeing drug crazed people doing despicable acts for almost an hour. Add to that shattering experience the cuss words and lewd stories rifling out of their foul mouths. These acts are light-years away from contemplative moments experienced by Heremias. He may have been itching to walk away but cannot because he might miss out on something important. He (and the viewer) patiently waits. The waiting took the whole of the penultimate hour but no earthshaking info came out of it.

Paradoxically refreshed from the draining segment, I later caught on with the important plot info. The last hour of the film saw me eagerly anticipating Heremias’ efforts to rescue a young girl. After exhausting major means of saving her, the prophet-like Heremias gets kicked out of town by the police chief and left unconscious in the forest. Upon waking up, he implores God to save her. He hikes off to the mountains and vows to fast for 40 days. Redemption comes at last to the troubled wandering merchant.

I’ve seen a two-hour preview of Book Two and it lives up to the high standards set by Heremias [Book One: The Legend of the Lizard Princess]. I hope Diaz can finish Book Two so that viewers can finally grasp the answers to lingering questions such as: What happens to the young girl? What are the dark secrets of reticent Heremias? Will Book Two equal the excellence of Book One?
Posted by Film Angel at 10:11 PM