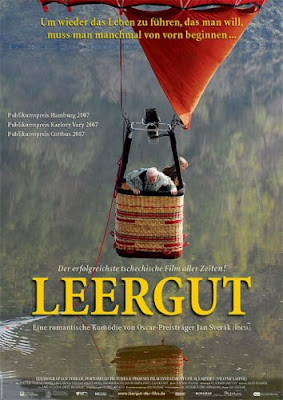 Not unlike Umberto D. in Vittorio de Sica’s 1952 masterpiece, Josef Tkaloun is an old and senior citizen who seems to be running on empty. He is the picture of a spent force, slowly becoming out of touch with his profession, alienated from his young charges and the inexorable march of the times. (He mistakes a recycle bin on a computer's operating system to mean an actual waste basket.) His weariness and surliness with his insolent and irreverent students one day reaches the tipping point. He declares to the principal: he is no longer happy; he tenders his irrevocable resignation.

The film, however, doesn’t go downhill, and downbeat, from here. This prologue is one, big red herring. Jan Sverak’s film is anything but a somber neorealist treatise about old age and marginalization; instead it proceeds to capture something more cheerily humanist, a picture about joie de vivre.

The joy of living. Of that, Tkaloun has plenty to spare. Nobody’s fool and nobody’s patsy, he is someone who would like to pursue life on his own terms, though sometimes ill-advised. First, he takes on a young man’s job as a courier – the kind that requires him to negotiate city traffic on a bicycle. The results prove disastrous. After an almost debilitating bicycle crash, he lands a closeted job at the supermarket. It’s a job that merely requires him to receive assorted empty bottles from customers. It’s a thankless job on paper, enough to make his wife feel scorned. She voices to him her suspicion that he is trying to stay away from her.

Her fears may not be entirely misplaced. Meanwhile the new job presents singular joys for Tkaloun. (It also affords the film its title, an ironic but apt metaphor). Perhaps after the years of aggravation from school children, he relishes the intercourse of grown-ups. Before long, he befriends everyone at the supermarket, his fellow employees and a diverse collection of regular customers. Among the lot, there is the old and reticent Rezac, who heads the station that processes the empties; Lamkova, the feeble, old woman, who depends on Tkaloun to deliver groceries to her home; and Ptackova, another customer, who has made no bones of wanting to have an affair with him.

Written and conceived and brought to life by Zdenek Sverak, the director’s father, Tkaloun leaps to life among a crowd of empties, both the literal and figurative ones. He plays the role of an aging cupid, a positive but mischievous enabler, who connects the many lonely characters around him: from old man Rezac to Tkaloun’s divorced daughter, Helena. As relationships he has engineered prosper around him, Tkaloun, too, is entertaining temptations in his own life. They haunt him in frightful yet funny dream sequences that provide a surreal tone to the film. His wife, however, may have learned a trick or two from him.

Ending with a symbolically life-embracing balloon ride above Prague, Empties is a return to form for the father-and-son team behind Kolya, the wonderful Oscar winner for best foreign picture in 1996. Jan Sverak’s direction may be sometimes too winsome, and too witty (if that’s ever bad) and his metaphors too neat and apt; and Zdenek Sverak’s characterization too enthusiastic and childlike; it can’t be denied that they work well together. After a much-publicized falling-out during filming, the Sveraks appear to have patched differences with the recent release of a new collaboration entitled Kooky. May there be more partnerships in the future!

Posted by Northern Portrait at 11:36 AM