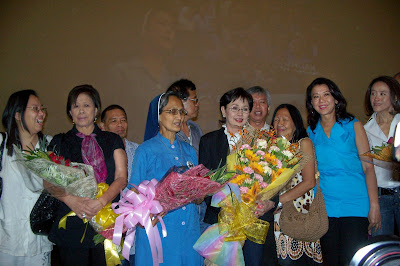 Cine Adarna, UP Diliman, Quezon City (March 20, 2009) – Award-winning actress Vilma Santos and showbiz colleagues shared their stories at a forum dealing with Mike de Leon's Sister Stella L. The reunion was part of the 25th anniversary celebration of the film.
The seven panelists were Vilma, actress Laurice Guillen, scriptwriter Pete Lacaba, production designer Cesar Hernando, producer Mother Lily Monteverde, film critic Mario Hernando, and film academician Roland Tolentino.
Mother Lily and Vilma narrated that they cried during the first showing day of the film in 1984. The film suffered a severe box-office beating by Sharon Cuneta's movie Bukas Luluhod ang mga Tala. The film of the Star for All Seasons was groveling in the dust.
But 25 years later, Vilma's film is still the talk of the town and is rightly recognized as one of the best Filipino films of the 20th century. Roland Tolentino enumerated the three major reasons why the film is a gem of Philippine cinema. He noted the excellent acting by Vilma and the rest of the cast. Laurice Guillen remarked that she had to let go of her stage mannerisms in order to properly portray a nun. It remains a milestone in her acting career. A somewhat embarrassed Vilma admitted that she was clueless on the film’s message during the course of the shooting.
Tolentino also highlighted the social realism of the film. Labor problems, persecution of media, and harassment of nuns were effectively portrayed in the film. A forum listener, Sister Rosario Battung, confirmed that her colleagues were stalked by military men during the Marcos regime. They were being harassed by the police and soldiers. A Kilusang Mayo Uno member said the film was always one of the films viewed at picket lines. Pete Lacaba butted in to say that hopefully the DVD copy was an original one. He also noted that media persecution got worse during the administration of President Gloria Macapagal Arroyo. Radio commentators and print journalists were being killed.
The last one mentioned by Tolentino was the Brechtian ending. Sister Stella L was directly speaking to the audience. She was exhorting the people to take a stand against human rights abuses. Cesar Hernando confirmed that there was a different ending shown at the Venice Film Festival. The festival version showed the monologue by Sister Stella L. It was then followed by a shot of multitudes attending a huge anti-Marcos rally. The courageous film was instructing people to join anti-Marcos rallies!
Mario Hernando said the likes of Sister Stella L may never be produced again. It was made during a time of intense patriotism among the Filipinos. Nowadays, love for country among Filipinos ranks way below love for family, love for career, and love for box-office money. Mother Lily shrugged off from doing more relevant films due to the film’s poor showing at the box office. It was a surprise then to hear Mother Lily saying that she plans to do another Sister Stella L during the forum. I had a blast seeing the eyes of the usually stoic Tolentino nearly pop out.
Lacaba touched on the genesis of the script. Mon Isberto wrote a script on nuns involved in agrarian reform. The script metamorphosed into a Lacaba story dealing with an activist nun in the city. During pre-production, Lacaba begged off from editing the script. He was then working on what would be Bayan Ko: Kapit sa Patalim. De Leon and Jose Almojuela were the ones who pruned Lacaba's script. Ellen Ongkeko added some dialogues.
De Leon and his crew had an easy time shooting the film. Cesar Hernando said it was one of the easiest shoots of a de Leon film. The real reason may have been the professionalism and efficiency of the film crew. Vilma shared the story of how the crew worked into the night preparing for the next day’s shooting. She loves to work with de Leon again. She hopes de Leon will make more films. That is also the fervent wish of countless local film buffs.
*******************************************
Film trivia:
Sangandaan - Film producer Marichu Vera Perez found the original title of the film to be too serious and suggested Sister Stella L as title
Sister Stella L - During research, Pete Lacaba interviewed several Stella Maris nuns. He decided to use Stella as the activist nuns' first name. The shortened surname was cribbed from Sophia Loren's film Lady L
Republic Oil Factory - the setting for the fictional factory is a true factory owned by producer Mother Lily Monteverde
Kung hindi tayo kikilos, sino ang kikilos? Kung hindi ngayon, kailan pa? - The immortal lines were coined by Ditto Sarmiento, editor-in-chief of The Collegian
Posted by Film Angel at 5:12 AM