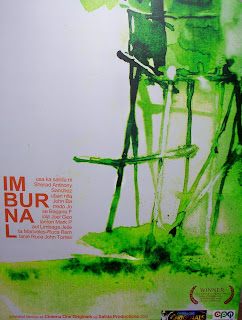 Cebu, Boracay, and Davao City are the top tourist destinations in the Philippines. In the case of Davao City, visitors must have felt safe and secure with the city’s almost crime-free tag. Davaoeño filmmaker Sherad Anthony Sanchez shatters the city’s image with his latest courageous film.

Imburnal is the best local film I’ve seen in 2008. A brutal and unflinching statement against the death squad of Davao City, the movie portrays a city plagued by extra-judicial killings and forced disappearances. In a ruthless bid to cleanse the city of crime, vigilantes exterminate juvenile delinquents and suspected criminals as if they were mere cockroaches.

The rancid lives of the poor kids and teenagers were fleshed out in gory details. They shoplift clothes. They freely narrate their experiences in bed. They indulge in group sex inside the filthy sewer pipes. They roam the well-lighted streets of the city in the middle of the night.

The sewers of Punta Dumalag in Barangay Matina Aplaya end up as favorite hangout spot of two boys (Brian Monterola and Allen Lumanog). The pair spends countless hours in the sewers. They sleep there. They play with cockroaches. They swim in the murky waters. The sewerage system is the place where they witness loveless sex and lifeless bodies of teenagers. Childhood laughter gave way to fear and apathy after corpses started to sprout like mushrooms.

In March 2009, three months after the release of the film, the Commission on Human Rights initiated a much-delayed probe into the unexplained killings of 814 people in Davao City since 1998. Most of the vigilante-style killings have been attributed to a shadowy group called the Davao Death Squad (DDS). City Mayor Rodrigo Duterte denied that the government was behind the DDS. He said the killings were the result of gang wars, drug trade rivalries, and personal grudges.

Imburnal compares Davao City to a well-maintained, white-painted tomb. On the surface, it is so peaceful, clean, and nice to look at, but inside, it stinks and is full of rotten things. A memorable scene from the film shows a trio of juveniles traversing the city’s expansive cemetery. It is so big that they eventually got tired trekking the place.

The 210-minute film contained other highly memorable scenes. The initial scene surprised me because I never knew that a kid was lying on the concrete sewer pipe. The kid blended so well with his environment that he became invisible. A similar scene showed another marginalized young denizen sleeping on a pathway along the river. He became visible only when the camera started to zoom in on him.

The fantastic last sequence showed the playful two boys aping Tarzan atop a tree along the river. I had a hearty laugh after hearing and seeing a tree branch break. I was laughing so hard that when another branch broke I was caught unaware. I gasped and it took me some time to gain back my wits.

If you’re game for a different kind of viewing experience, then try to see the director’s cut of the film. Just prepare, really prepare, to get in the flow of Sanchez’s hellish and pitch black vision of Davao City.