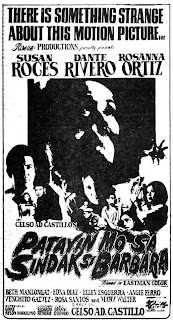 The smart and pretty accurate title says it all! This classic is really a terrifying chiller of a movie.
Nurse Barbara Enriquez (Susan Roces) comes back to the Philippines to attend the wake and interment of her stepsister, Ruth Martinez (Rosanna Ortiz). She extends her stay in order to help her niece Karen cope with the loss of her mother. Meanwhile, strange things begin tormenting the members of the household.
Director Castillo utilized mirror and glass reflections to enhance the visual appeal of the film. He also came up with distorted shots and eerie camera angles to heighten the terror index.
I can’t forget the cemetery scene involving Ruth and Barbara. I remember Rosanna Ortiz from her films with Dolphy. I never imagine that she can be this effective in portraying a vengeful woman. The piercing glances of Ruth are diabolic. The scorned woman is really bent on killing people who have hurt her. From that point on, the suspense goes on full throttle until the end of the movie.
One of my favorite scary moments sees Fritz Martinez (Dante Rivero) approaching Barbara at the fountain. You can feel Barbara is uncomfortable talking to Fritz. The audience is left wondering if they indeed had an affair. There is unbearable icy tension because Ruth may chance upon them. When the doll appeared, I nearly jumped from my seat. The excellent music score played a big part in setting the mood.
The only false note in the film is Barbara's attempt to calm down Karen by reciting the Apostle's Creed. Susan Roces' delivery bordered on campiness. That was the only thing that marred Roces' otherwise fine performance.
I hope Cinema One includes this horror classic in its annual film festival/competition. It deserves to be seen in a darkened movie theater. Try to imagine ogling the eyes of the vengeful Ruth on the big screen! Whew! That ought to be a spine-tingling moviehouse experience.
Posted by Nel at 7:37 PM