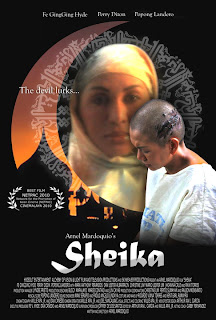 The film Sheika, a captivating and haunting valentine to the beautiful but violence-wracked island of Mindanao, is my favorite at the Cinemalaya 2010 festival. The powerful images (eg. an 'imprisoned' Gary reading Shie's journal) and life-affirming stories crawl their way into your head and stay embedded there along with your cherished memories.

Fe GingGing Hyde comes up with a devastating performance as Shie, a Tausug widow who lost her mind after the deaths of her sons. I cannot forget the part wherein she attempts to shield her son from an assassin’s coup-de-grace. Her unexpected action at the bridge is the best I’ve seen yet of maternal love and sacrifice in local cinema. Until the very end, she fiercely protects her children from the snares of the devil. Diyablo. That is the word she used to describe the goons. It bespeaks of the deep hatred she had for these fiends.

Combining the sensuality of Charito Solis, the fierceness of Nora Aunor, and the subdued acting of Lolita Rodriguez, Hyde is so awesome that I can’t think of any actress that may do justice to the role of Shie. I was wondering who the festival officials had in mind for the main character. It was said that a pair of Cinemalaya officials voiced out their preference for a mainstream actress.

Filmmaker Arnel Mardoquio did the right thing in withdrawing his film from the New Breed competition. He refused to heed the 'suggestions' of the powers that be. He stuck with his decision to film with a purely Mindanao-based crew and actors. In the end, he was vindicated. The resulting film eventually won the Netpac Award.

The bittersweet movie boasts of a brave, gripping script and lovely soundtrack. It is the first indie film to deal directly with the notorious Death Squad in Davao City. Previous films, such as the excellent Imburnal and Engkwentro, only allude to extra-judicial killings by nameless death squads. Sheika takes the issue head on. It presents the true story of a mother who’d lost her four sons to the heartless assassins of Davao City. It indicts the local business group for supporting the death squad members.

The soundtrack does not seem to include a song by Joey Ayala, but his song themes are very much apparent. Davao City and Mindanao in the film were not unlike the places depicted in the songs of Ayala. Gun-related violence and bloodshed mar the beautiful city and the bountiful island. Hamletting and discord are widespread. With corpses springing out from nowhere, the city is slowly turning into a cemetery. Pastilan! Pastilan... Ang Dabaw ay sementeryo!

However, just like Shie, Davao City and the rest of Mindanao can still recover from a traumatic past. Twisted loving care from a friend helped Shie to get well. Local songwriters and filmmakers seem to agree that love can overcome violence and hatred in Mindanao. The Cinemalaya 2010 standouts Limbunan and Sheika both utilized Asin's immortal song Himig ng Pag-ibig in their soundtracks. Amidst all the misery and ugliness brought by the war, the Mindanaoan filmmakers are still hopeful that beauty, peace, and love will reign someday in the southern Philippine island.
Posted by Nel at 7:48 PM