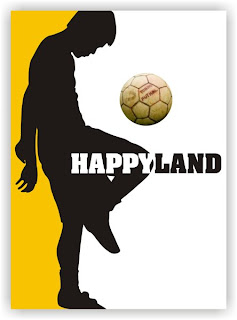 Who is the all-time highest goal-scorer of the Barcelona Football Club?

Is it David Villa of the World Cup 2010 winning team Spain? No. Is it exciting-to-watch Argentinian player Lionel Messi? No.

The answer is Paulino Alcantara. The early 20th-century footballer scored a phenomenal 357 goals in 357 matches! He is one of the legendary players of the venerable club. And, he is a Filipino.

Flashforward to the 21st century. The sport of football is no longer on the radar of most Filipinos. Despite cable television bringing live broadcasts of World Cup 2010 matches to local viewers, football did not make a huge dent in the consciousness of the Filipino people. It seldom dominates headlines and front page stories in our basketball-crazy country. So it is quite surprising and gladdening to read news, and see television coverage, of the Phl football team's entry into the semifinal round of the AFF Suzuki Cup 2010.

On the night the film Happyland had its world premiere at Cinemanila 2010 in Robinsons Movieworld Galleria, a spunky football team from the Philippines pulled a stunning 2-0 win over the defending champion team from Vietnam. Phil Younghusband, who had a cameo role in the film, scored the second goal for the defense-oriented Azkals. The extraordinary good news is a perfect assist to the advocacy of non-profit organization Futkal Inc and filmmaker Jim Libiran.

Futkal is an acronym for Futbol sa Kalye (Football on the Streets). The group passionately teaches children the game of football in an alternative way. It takes away the notion that football should be played only on soccer fields. It is definitely not a game only for rich kids. Anybody can play football in an abandoned street, open space, or vacant lot.

Jim Libiran returns once more to the streets of Tondo in Manila for his second film. Just like his debut film Tribu, he focuses on a group of young people. These impoverished young boys are no longer rappers but futkaleros or street footballers. A Spanish missionary priest named Fr. Jose manages the group and zealously preaches the gospel that football is the sport for Filipinos. He always tell the amazing exploits of footballer Paulino Alcantara in Europe to prove his point.

Shunning the edgy story, dark milieu, and raw violence of Tribu, Libiran molds a more mainstream film for his target audience: the youth. His new film deals with the problems of a varied set of young characters such as a neighborhood basketball idol, a fleet-footed snatcher, a pedicab driver, and a pair of solvent-sniffing friends. The straight-forward story traces how this odd group of resilient misfits rise to redemption. The best parts of the film are the football match segments. They give valuable insights on how the futkaleros play the game and how they behave. Their unorthodox playing style may not be the beautiful game played by the Germans or the Brazilians but it produces good results for the team. In March 2010, a Tondo futkalero was part of the Phl team that won a trophy at the Street Child World Cup in South Africa.

Happyland may not be a beautifully slick film, marred by still-to-be-refined blurry shots, but it gets an A for advocacy. Libiran plans to show the film to schools and youth clubs all over the country. The film screenings will hopefully result in more kids getting out from a drug and crime-filled life and getting into the wonderful world of football. Local teams winning tournament matches are mere bonuses.
Posted by Nel at 7:25 PM