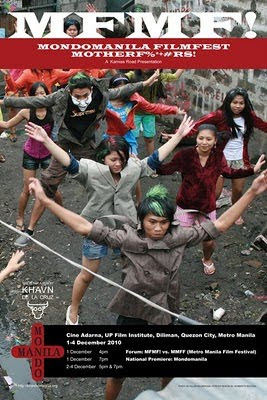 These body fluids, this defilement, this shit are what life withstands…

Any crime, because it draws attention to the fragility of the law, is abject, but premeditated crime, cunning murder, hypocritical revenge are even more so because they heighten the display of such fragility.

-- Julia Kristeva, An Essay on Abjection

Frivolity aside, Mondomanila represents one of Khavn’s best films to date. Here is a flower of evil plucked from the fertile dung of the margins, blooming among the dregs of society; here is a work of uncompromising and unwavering vision, a film that was almost stillborn, but now here in our midst, jumping out at us like a jack-in-the-box, thumbing its nose at us who cower behind blinders. In a word, be prepared for a frightful but rollicking ride through a no-man’s land that we, the coddled, hold our breaths against and turn away from.

At the rotten core of Mondomanila are teenage layabout Tony and his juvenile posse, Paranoid X, pleasure-seeking delinquents without a future but never to be taken for pushovers. Here in their neighborhood of slums and garbage dumps, they are kings, and the cameras observe them in very close proximity, rendering them through hallucinatory filters, washed-out colors, split screens and strange lighting. These Bunuelian olvidados exhibit few inhibitions: young, brash and compliant, they mouth their syntax of obscenities and perform outrageous acts that straddle the lines of morality. They sing and rap, some of them break-dance, some hold small jobs, some don’t, but what makes them gravitate together, what defines them, are common misery and drug-induced fantasies.

Much of their adolescent fantasies, predictably, revolve around sex. Among them is a compulsive masturbator, who uncontrollably does his thing even in the group’s presence. Another literally engages in bestiality: easing himself on a live, squawking goose, just before he chops off its head. Lumped together, their sexual obsession is even worse: they peep on fornicating midgets and lesbian twins. Meanwhile, menace lurks in the background: Whiteboy, a Caucasian pedophile, makes no bones about his perverse ideology and submits the young kids of the neighborhood to “sexual slavery.” Soon his deviancy hits very close to home.

Figuratively, and all but literally, one gets buried neck-deep in Mondomanila’s proverbial bodily fluids. The immoral. The criminal. Few taboos remain unscathed here. Combining the abrasive aspects of his recent films namely Squatterpangk and The Family that Eats Soil, Khavn transvaluates Julia Kristeva’s notions of the abject and turns it from a source of horror to something darkly humorous. Instead of horrifying us and making our skin crawl, Khavn numbs and etherizes our sensibilities into a catharsis: blood, piss, excrement, bestiality, sodomy, and mutilation are here in plentiful doses that erode our guards. At some point we start to laugh; we wallow and luxuriate in it. Numbed and etherized in the abject, Khavn paves the way for his film’s subversive end.

Cunning murder, hypocritical revenge, to borrow Kristeva’s words, this is what the film deems its logical coda. Guile, cunning, hypocrisy are exactly the words that befit the crime, subsequently a composite of several crimes. The fact that the crime is compounded raises the acts to the level of the abject, many times over. We laugh nervously and must do a double-take, as the so-called heroes dance and sing for joy after the fact: We realize our rank complicity, our blurring concepts of right and wrong. We argue curiously: But doesn't the crime -- done as it is at the expense of someone draped with neo-colonial trappings -- translate to a symbolic act of patriotism? And how to explicate the aggravating actions after the crime? Reparations? Somehow it is so morally wrong; somehow it is so viscerally right.

Posted by Northern Portrait at 9:26 AM