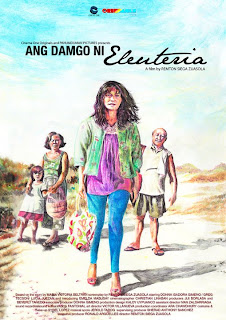 Days before the start of the Cinema One Originals 2010, there were high expectations for the film entries of Richard Somes and Remton Zuasola. Somes gained a well-deserved reputation for his film Yanggaw, which won majority of the awards at the Cinema One Originals 2008. Zuasola won raves for his Cinemanila 2009 short feature winner To Siomai Love. I haven’t seen the latter, which was said to be a one-take wonder, so I wasn’t sure if he deserved some of the buzz. I became more curious about his Cinema One entry when I learned that it was also done in one take.

One-take full-length feature film? Can Zuasola really pull it off?

Ang Damgo ni Eleuteria exceeded all my expectations. The phenomenal film is a knockout combination of adept filmmaking and caustic portrait of a Filipina mail-order bride and her debt-ridden family. Imagine mixing some of the colorful female characters of Noli Me Tangere, the craziness and wittiness of a Joey Gosiengfiao comedy, the savvy skills of a real-time method filmmaker, and the competence of a Cebu-based crew and actors, and you've got yourself a potent brew of pure indie film goodness. It is so good that as the end credits roll on you cannot wait to watch it all over again. It is simply the must-see Pinoy indie film of 2010.

The film begins with a mother searching for her daughter, Eleuteria. Along with her husband and her other daughter, they scour the area for traces of the lanky teenager. The latter is seen trying to drown herself in a creek.

Eleuteria is a mail-order bride who, until the last minute, dillydallies with her decision to go to Germany. She has a local boyfriend. This fact, along with the thought of being ruthlessly shoved into marrying an elderly foreigner named Hans Kirschbaum, makes Eleuteria hesitant to go abroad. Ironically, these two factors become crucial decision changers in the end.

The spine-less boyfriend desperately coaxes her to elope but eventually surrenders because of strong opposition by the parents, relatives, and friends of Eleuteria. Another spine-less male figure is her fisherman father. The latter objects to his daughter's impending marriage but doesn't want to impose his will on the matter.

When she decided to drown herself, Eleuteria tries to call attention to the fact that she does not want to go away. Locked in a psychological battle, she just doesn't want to give in to the whims of her mother. However, constant nagging by her mother made her decide to accept her elder's wish. The belated decision is not so much a daughterly obedience but more of a rebellious, contemptuous act against her mother and the spineless male figures in her life. In a chance meeting with a childhood friend, she says she will never set foot again in their small hometown.

But, just like migratory birds frequenting it, they do come back to Olango Island, Cebu. Cousin Merle, recently separated from her German husband, comes home for good. With her savings, she is able to build a three-storey house. She is the one guiding Eleuteria every step of the way.

The film captures the long, eventful journey of Eleuteria from a creek to the boat terminal in a masterfully orchestrated one take. The ensemble acting is so natural and realistic that the local residents don't mind the shooting happening in their midst. The actors are just like members of a regular family out to send off one of their family member. Even the crazy guy seems to be not out of place. Most barrios in the Philippines have their share of loonies. In this film, the barrio has craziness as its theme for a fiesta. Aside from the crazy guy, there are other interesting characters in the film such as the scene-stealing father and the Paris, Italy-based (!?!) recruiter. Their interaction with one another produces loud guffaws from the audience. The witty screenplay is based on a novel by Maria Victoria Beltran.

Zuasola deserves all the hoopla (and awards) for his film. On the other hand, Somes' film Ishmael didn't live up to expectations. Its best scene shows a fallen alien unsheating his blades on his arms and whooping up hordes of Decepticons. Oops, I think that is from the film Transformers: Revenge of the Fallen. See, I can barely remember good things about Ishmael. Somes loses his magic touch with his second film. I hope Zuasola doesn't succumb to the so-called sophomore jinx.