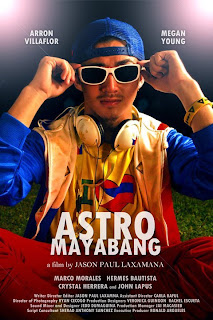 I'm amazed at the increasing number of young filmmakers in the movie industry. With Cinemalaya and Cinema One Originals leveling the playing field, all the tyros need to do is present feasible good screenplays. Their shortlisted stories are so refreshing, daring, and original that you just had to forgive them when they come up with untrammeled, technically unpolished, and information-overloaded films.

Astro Mayabang does not have that glossy and slick look of a major studio film but its screenplay has a few noteworthy things to say. It tells the story of a Kapampangan lad named Astro who wears his patriotism on his sleeves literally. Part of his daily get-up is a Philippine flag-inspired jacket and Pinoy pride shirts and paraphernalia.

The film takes a swipe on Filipinos who passionately latches on to all Pinoy achievements, no matter how small, in order to mask their shameful and disgusting behavior. Patriotic Astro has a flipside attitude in that he is a racist and a xenophobic. He castigates a couple of foreigners for refusing to give alms to a beggar. Misdirected criticisms against the others reflect on the idleness and insecurities of Astro. He should ask himself what he has done to improve the lot of his dysfunctional family and poor countrymen. They are barely scraping by but show-off Astro still keeps on buying those colorful, expensive limited edition shirts and jackets. This reflects on the fiesta mentality of some Filipinos. The latter are willing to go to loan sharks in order to serve sumptuous food dishes that leave a deep impression on visitors. Di bale nang mabaon sa utang, basta may maipagmayabang lang sa kapwa.

Astro goes to great lengths to proclaim his love for Pinoy singers and music groups but he buys only pirated compact discs. He is like one of those Facebook fanatics who keep on liking films they haven't seen at all. The film aptly puts it: ‘Loving someone doesn't end in simply claiming that you love someone or something.’ You have to walk the talk. Don't just proclaim your love for the artists, show it. Support your favorite singers by buying original CDs. Watch their films on movie houses. More importantly, emulate those traits that help Pinoy achievers excel in their respective fields.

Insecure Astro is not so much suffering from what Nick Joaquin noted as Filipinos' heritage of smallness but more so from lack of solid knowledge about his country's history, arts, politics, and cultural heritage. Yes, Astro has a superficial, tiny amount of Filipino-ness in him. He yearns for those rare Pinoy pride moments that temporarily boost his self esteem. Astro even appropriates some foreigners in his small set of contemporary idols and icons. His concept of an idol is one carved out of colonial mentality and love for Hollywood. All across his room are pictures of 8-division world boxing champion Manny Pacquiao, 'Glee' actress Charice Pempengco, Journey lead singer Arnel Pineda, wrestling icon Batista, Tony winner Lea Salonga, and even that of Cristeta Comerford. Cristeta who? She is the Executive Chef of US President Barack Obama.

Take away the temporary phenomenal effect of the Pacquiao fights and Astro will not be as happy and proud to be a Filipino. What if Pacquiao retires from boxing or, shudder the thought, loses a match? Who will then give a boost to the superficial Filipino-ness of the youth? Politicians? Entertainers? Indie filmmakers? The latter group has been a steady provider of good news to Filipinos. Their award-winning films have conquered film festivals around the world.

A character from the film remarked that Filipino films suck. Well, he might change his mind after watching the wonderful entries from the Cinema One Originals Digital Film Festival 2010. In an amazingly fruitful year, majority of the films are good enough to warrant repeat viewings. Astro Mayabang, marred somewhat by the repetitive use of footages, boasts of fine performances by Arron Villaflor and Megan Young. It received a special citation from the festival jury and nabbed the Audience Choice award, which seems to be based on box-office performance. Jason Laxamana must have been proud. Hmm, a popular hit and a critical citation for a debut film? Not bad for an undergrad student.
Posted by Nel at 4:51 AM