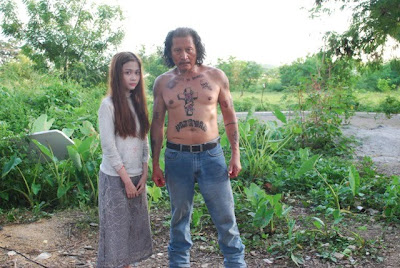 Richard Somes knows how to hardsell his latest film. Ishmael, he declares, is a homage to the Filipino western. A salute to a long-lamented genre, a shout-out to the pantheon of cowboy icons of the past. He rattles off the names one by one: Lito Lapid, Dante Varona, and Ramon Revilla Sr. Ah names to remember, he sighs, and his words whet our appetite, treble our expectation of impending fun. Expectation, perhaps, of a humorous spoof, or a deadpan tribute.

Alas, for all its declared heritage, for all the hoopla around this new film by the celebrated director of Yanggaw, Ishmael is a paradox of a failure. There is little to none of our own spaghetti lore revisited in this film. None of the director’s mustachioed heroes. (The mustache seems to be his fetish.) None of the genre’s tropes and trademarks. (Sure it features the trope of revenge, but so does any kung fu film.) None of the wide-brimmed hat; the skittish horses, the hot, sandy deserts.

It’s not as if Somes is aiming for something more cerebrally unique, more intricately intertextual. Somes himself declares, at the outset, how Ishmael is little more than a genre exercise. Leaving aside this authorial self-deprecation, one regrets to report that the writer-director is not wide of the mark. And worse. What Somes perhaps believes to be new and innovative is the persistent referencing of films outside the genre of the western – as if to do so is to transfuse new blood and resuscitate this dead category. Epic fail. The effect is plain pastiche. All the allusions point to are the viewing habits of Somes: Anglo-American, sure. While at it, Somes does not disguise his filmic methods and modalities: he quotes generously and flagrantly.

Notice The Night of the Hunter knuckle tattoos on Ishmael. Disappointingly, the tattoos on this ex-convict, returning to a town ruled by a messianic cult figure, tell no story. They are not so much palimpsestic layers but so much like badly done graffiti. Notice the scripture-quoting character from Pulp Fiction, the megalomaniac who counterpoints Ishmael’s down-and-out figure. This film drips with so much Tarantino obsession that it’s hard to shake off the image of Samuel L. Jackson quoting chapter and verse. Notice towards the end the Edward Scissorhands’ weaponry at work, part and parcel of a character who resurrects from the dead to unleash his inner Rambo, his murderous rampage.

That may be the most intriguing moment in Somes’ film -- its sudden, last-ditch flight from realism, the last-second departure from the predictable. We have been waiting for the irreverence, the impiety at the expense of the conventions of this double-dead genre to kick in and here it is…But too little, too late. Everything that came before bleeds into it, engulfed by our ennui and indifference.

Ishmael remains very good to look at, but hardly disguises its architectonic flaws. It is sumptuously photographed and well put-together from latter-day film techniques, the handiwork of an accomplished and au-courant filmmaker, but the screenplay is scantily, too safely written. A script doctor would have helped a lot. As it stands, the script is severely wanting, perhaps the element of the sustained send-up, or perhaps a modicum of tension that could propel it through the swathes of expendable exposition. Expendable exposition is what happens when a film is meant to be a vehicle for its acting talents. The speaking parts here are not particularly piquant but just plain redundant.

The compelling villain also eludes this film. Not even Mark Gil’s efforts at camp and tongue-in-cheek delivery deflect and redeem the Tarantino borrowings: the effect is neither chilling nor humorous. His figure is an ironic Messiah, a Pontius Pilate and lecher rolled into one, and still seems not evil enough. His minions always do his bidding, even when we like our villains rough-and-tumble, their dastardly deeds not overheard but evident. Yet the little touches could have sufficed. The lone telling moment about him is his choice of a serenade piece: atonal music on the piano a la Arnold Schoenberg. Good one.

Ishmael, in the end, is not even close to imitating the western. What it parallels better is the samurai. This is no better exemplified than by the fight scenes at the film’s climax, with one man, strapped with bolo blades at both hands, taking on a townful of religious cultists. Reverberations of Masaki Kobayashi’s Hara Kiri or Kihachi Okamoto’s Sword of Doom are set off. He is like an avenging, exterminating angel. Coming back from the dead, he may be staking a claim to the mantle of the real messiah. Or maybe just staking a claim to redemption, a little of dignity.

Posted by Northern Portrait at 10:06 AM