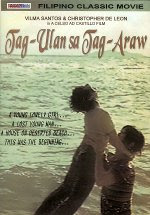 A lot of movie industry people were interviewed for this documentary on the legacy of filmmaker Celso Ad Castillo. Some of them call him Maestro. Others look up to him as a genius. Lav Diaz affectionately describes him as a madman. But, I tend to agree most with their observations that Castillo is a visual artist par excellence.

One of the best visual stylists in local cinema, Castillo was aptly described by Peque Gallaga as a lucky cinematic animal. The heavens and the weather conspire to create a picturesque moment every time he shoots a film. Castillo admits to having fits over the setting up of his first ever camera placement. But, once he got over it, he goes on to utilize his being a former comic book illustrator to paint beautifully-framed stories.

Check out the odd camera angles of his horror classic Patayin Mo Sa Sindak Si Barbara. The coffin being carried out of the hearse seems to have a 3-D effect of trying to break through the screen. The eerie mirror reflection of Ruth's diabolical glare still brings shiver to the spine. The haunting visuals and spooky soundtrack bolster the film's reputation as a scary terrifying flick.

There's a story behind the famous wet look popularized by beauty queen Gloria Diaz in Ang Pinakamagandang Hayop sa Balat ng Lupa. She narrates how she was showered with lots of movie contracts after her return from the United States. From those offers, she chooses Castillo's. She was so impressed with the filmmaker's Patayin Mo Sa Sindak Si Barbara that she promptly said yes. New and still naive in the film industry, she hikes off to location shooting with nary a change of clothing and underwear. The film crew accompanies her to a nearby town to look for a bra. The available ones for sale are so bad Diaz decides not to wear a bra in the movie. Since the movie is set along the sea coast, there are shots of Diaz in a wet, see-through dress. The catfight between Diaz and Elizabeth Oropesa on the coastline is the stuff that wet dreams are made of.

Castillo went on to do much more revealing films for the Manila International Film Festival and the Experimental Cinema of the Philippines. His films Virgin People and Snake Sisters emerged as top-grossing flicks. There is a clip from Snake Sisters that shows Castillo's wicked sense of framing. We see a young scantily-clad female hunter searching for a prey. With her body crouched low, her posterior is prominently seen and surrounding it are dozens of erect phallic sticks.

Castillo loves casting beautiful women in his films. He also adores the sea and the rain. Almost always there is a scene in his films set along the waters or set during a rainy day. Ron Bryant, a protege of Castillo, indirectly paid tribute by directing a Cinema One Originals film titled Alon, a story of a pretty, nubile girl vacationing at a seacoast village. Bryant upped the ante by helping create this eye-opening documentary.

The best visual revelation I'd discovered from the documentary was seeing traces of Fernando Amorsolo in Castillo's agrarian film Ang Alamat ni Julian Makabayan. The enchanting sunlight bathing the fields, the colorful attire of the farmers, and the framing of the daily rituals allude to several paintings of Amorsolo. Aside from the visual references to Amorsolo, the film is also memorable for those shots of farmers seemingly bonded to the lands. From a distance, a group of farmers are busy doing planting chores. Most of the time we see them with only their upper body half visible. The missing legs say a lot about rural bondage and feudalism in our country.

I'm extremely thankful to Cinema One Originals 2010 for giving moviegoers a rare chance to view bits of Castillo's works at Shang Cineplex's Premiere Theatre, a top-tier luxurious movie theater with excellent sound system. Castillo and Lav Diaz are this year's worthy recipients of a tribute by the annual competition for independent filmmakers. Cinema One Originals 2010 is ongoing at the Shangri-la Plaza Mall until Tuesday, November 17.
Posted by Nel at 3:40 PM