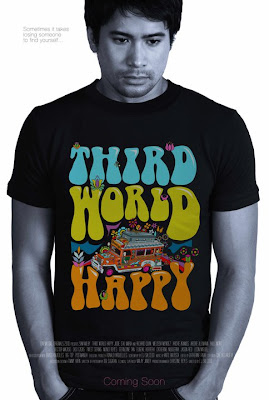 This smart and competent film of Edward James Salcedo was the third consecutive good film I saw at the Cinema One Originals Digital Film Festival, which is ongoing at the Shangri-la Plaza Mall. The sixth edition of the film festival promises to be the best ever yet in terms of higher-than-average quality of competing films and exhibition films such as Confessional, Wanted: Border, Hesus Rebolusyonaryo, and Serafin Geronimo: Ang Kriminal ng Baryo Concepcion. The last two films were shown last weekend on cable channel Cinema One as part of the film festival's tribute to maverick indie director Lav Diaz.

Third World Happy is the best Sam Milby film I've seen yet. The acting ensemble, the direction, and the screenplay are all superb. The dashing actor still speaks in an American accent but this time it fits his character Wesley Tecson, a gifted painter based in the USA who comes back to the Philippines because of the death of a loved one. In the course of his stay here, he encounters what it is like to be happy and contented.

Milby doesn't bare his abs but gets to effectively bare the angst of his character. Wes is a Fullbright scholar who ends up as a lowly assistant in an art gallery in New York. He shies away from contact with his family and friends in the Philippines. One of those he left behind is his ex-girlfriend Aylynn (Jodi Sta. Maria). The scene showing the initial meeting of the two after 12 years of separation was well directed by Salcedo. The characterization of the two former lovers were so fleshed out that the audience gets to empathize with both of them. Sta. Maria was so good in portraying a jilted woman trying to put up a brave front. Giving ample support to the leads are Melissa Mendez, Archie Alemania, and a host of other actors.

New filmmaker Edward James Salcedo based the film's story from his life experiences. A proud Thomasian, having graduated from dear old UST Elementary in 1983, Salcedo finished high school and college in the United States. Racism changed his world viewpoint. Life in the First World is not as happy as in the Third World. He persevered in the competitive world of advertising, where he encountered similar people stuck in their day jobs because of the need to pay the bills. Most have given up on their dreams to become comic book artists and filmmakers. The death of his uncle led EJ back to the Philippines where he eventually got to fulfill his dream of being a filmmaker. In 2007, the Manunuri ng Pelikulang Pilipino nominated EJ Salcedo's short feature Talahib, which dealt with faded dreams.

The theme of lost dreams also crops up in Third World Happy. Much expectations were borne by Wes in the United States. Everybody expected him to conquer the art world. But, not everybody can be a Juan Luna.

I like the character Achi in the film. She is first seen reading the book Ilustrado, which suggests that the dead is not who you expect it to be. She envies author Miguel Syjuco for having conquered the literary world. Wes asks her why she doesn't pursue her writing. Achi replies that she had to take over managing their family's funeral business. On the day of Wes' departure, she is able to make Wes proud of her writing. She may not have been a Syjuco but at least her well-written obituaries can still make a huge difference.

Wes realizes that he doesn't have to live to the expectations of people. He doesn't have to create a Spoliarium or an Ilustrado to make people proud of him or to make them happy. They are already happy. He just needs to do what is important and joyful for him to do. At the end of the film, he goes home.