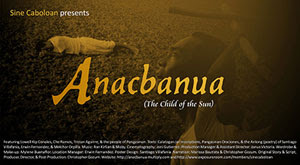 Somewhere deep in the night in distant , the present year, a Filipino writer, burning the midnight oil, is suddenly seized by a creative paralysis, a profound crisis of identity. He is a poet of a dying breed, if being a poet is not an ephemeral fate in itself, as he labors to write in his mother tongue, Pangasinense. We get a sense of his literary interiors by the books at his elbow: The Age of Reprieve by Sartre, Crime and Punishment by Dostoevsky, The Stranger by Camus. There seems to be the streak of the existential loner in him – a foreign legacy that doesn’t sit well with his antipodal upbringing.

At a crucial climacteric of his creative life, the poet decides drastically: abandon his overseas job and return to his faraway roots, literally and figuratively, in order to retrieve his generative bearings. Accompanied by no one but his sullen Muse, the poet surfaces in Pangasinan, brooding about his spiritual estrangement, thinking he is the last Filipino poet writing in the vernacular amid a welter of borrowed languages. Starting on this fairly worn premise -- the artist in creative limbo -- Christopher Gozum’ feature debut proceeds to a literally poetic and lyrical odyssey in the life of an embattled poet, as he tries to retrieve himself through an exploration of his native Pangasinan, its culture, its artisanal and creative industries.

Will the poet recover the heartland that underpins his creative spirit? What illuminations and epiphanies are in store for him? The poet journeys from town to town, Bayambang, San Carlos, Lingayen, among others, his destinations dictated by the salient features and textures of Pangansinan: the Agno River, its plentiful rice paddies, San Roque Dam, the baroque edifice of the provincial capitol, the brick makers, clay pot factories, the bagoong industries, the metalworks specializing in cleavers.

Anacbanua complements what the camera sees with fighting words and poetry. The first Filipino film to be shot entirely in Pangasinense, the soundtrack is a groundswell of sonnets and villanelles (the fiery an-long of Pangasinense poet Santiago Villafania) as though to document the creative and spiritual struggle and resurgence of the poet and the tempering sway of the Muse. Pangasinense has never sounded so fierce and fascinating, sacred and earthy.

There is a mystical and metaphysical edge to how the journey influences the poet. His Christian background, for instance, seems to make him confess to his sense of sin, his affinity with the fallen angel. His Muse in the meantime is impelled to make ritual offerings at the . Epiphany comes at the mere vision of paddy fields, and sets him into running like a child in boisterous, euphoric circles. Is he any nearer to the "Caboloan of old," that "parnassus of Pangasinan"?

Director Gozum's experimentalism, thankfully, eclipses the didactic and overly hortatory summation of Villafania's poetry at the end. The director's eye for the poetic seems attuned to the work of visual stylists like Sergei Paradjanov (tableaux vivant compositions) and Bela Tarr (the textural qualities, the tactility of the images, and the monochromatic photography). The film's imagery forms a disparate diversity that ultimately finds cohesion in their theme of renewal, regeneration and creation.

Tonight, at the 2009 Cinemanila International Film Festival Awards, Christopher Gozum marked his feature debut with an auspicious bang: Anacbanua won the Lino Grand Prize, the grand prize for the Digital Lokal category, besting five other entries including Armando Lao’s Biyaheng Lupa. The director, who conceived, shot and performed practically all aspects of post-production, made it a sweet double by bagging the best director award. It’s a pity he is not here but in faraway to receive his much-deserved prizes. Distance must indeed give this director perspective, in addition to what we presume are pangs of homesickness contained in Anacbanua. The great artist must indeed suffer for his art.

Posted by Northern Portrait at 8:57 AM