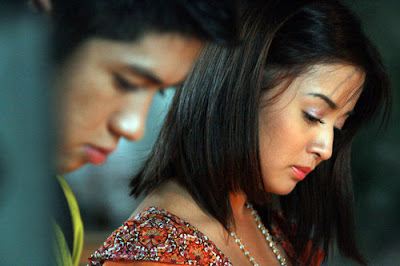 Veteran director Maryo de los Reyes is enamored with his lovely home province, Bohol. A tight budget prevented him from using Bohol as location for his Sine Direk project Kamoteng Kahoy. There were traces of great filmmaking in that movie but overall it was an inflated mess. With his latest film Nandito Ako, de los Reyes loosens up a bit and lazily relies on a formulaic romance film template.

Early, crucial scenes feature parents reminding their kids about the value of prayers. This emphasis on religiosity also shows up in the use of locations such as the local churches in Quiapo and Bohol. Other prominent tourist spots highlighted in the film are Bohol’s Chocolate Hills, Hinagdanan Cave, and Loboc River.

The beauty of the local beaches is complemented by the good-looking pair of Aljur Abrenica and Kris Bernal. The two youngsters register well on the big screen. However, Abrenica looks awkward in his dramatic scenes. His nicely-sculpted but bulky-looking body gives the impression that there is always a misplaced hanger up his shirt. He had a hard time portraying vulnerability onscreen.

The story and directing should have been given the same amount of loving care as the scintillating camerawork. Incredulities and inanities mar the story of a mother and her son who fled to Bohol to start life anew. The scenes showing characters falling over bodies of water are crudely staged.

Just when I was about to give up on this run-of-the-mill romance film, it surprises me with a satisfying ending. It wasn't because the young lovers got together again. The trigger behind their reunion is the one that caught my fancy.

The heartfelt ending is set in a church. In a scene that recalls the early scenes, we see a family member reminding a loved one about the importance of sacraments. It is the wedding day of Steph Luzano (Bernal). There is no sparkle in her eyes. Steph’s brother-priest reminds her that there is still time to back out. And, back out she did.

For a change, it is nice to see a scene highlighting the importance of the sacrament of marriage. However, it is a pity that the scene had to be in a pedestrian film that is nothing more than a travelogue movie for Bohol.
Posted by Film Angel at 12:01 AM