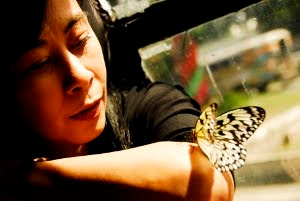 There is a little-known Serbian comic film titled Who’s Singing Over There? (Slobodan Sijan, 1980) that has a similar premise: a passenger bus, a long journey, a cast of disharmonious travelers who must keep their sufferance. There, too, is the star-crossed destination. The similarities are striking, but they remain on paper. Armando Lao’s Biyaheng Lupa outstrips its antecedent: it's not a simple account of claustrophobic travel, but a poetic, disembodied journey of voices.

Biyaheng Lupa is not so much a road movie, a journey to appointed places, as it is a trip into inner landscapes. Mouths barely open. Like telepaths, we hear the passengers think and feel inwardly, all their psychic activity audible on the soundtrack – making us privy to dramatic irony. Regrets, suspicions, disdains, fears, hopes, paranoias, desires, prejudices, the whote gamut: all feelings and senses oscillate in a steady stream-of-consciousness on this eventful bus ride. Travel has never been a more introspective activity. We don't get the impression of noise: the disembodied voices are devoid of ambient noise.

Lao’s characters strike close to Filipino homes and yet sound not too rehashed. Lao’s light satire sees them as caricatures caught in their funny and comical foibles. There is the man with the body odor who is unaware of it. This is complemented by a shadiness – pragmatic or opportunistic? – as he secretly wolfs down a wrapped espasol he finds under his seat. There is the multi-level marketer who dreams grand dreams of profits but is discomfited at every turn and finds no takers among a busload of streetwise passengers. His anti-cancer merchandise even gets him into trouble with the military.

There is the discreet, daydreaming cougar who is on her way to a tryst with her younger lover. Her thoughts of romance are broken as the town gossip has just come on board the bus. Her wariness turns to slight panic when she realizes that a picture of her lover and herself is missing. The gossip is an odd creature: a beautiful lady who is indeed profiled as a curiosity seeker. Yet her caviling instincts are balanced by her romantic thoughts for the ticket man on the bus.

They also come in parallels and polarities. The young text-mates, one of them a conflicted and secretive mute, who provide the aspect of puppy love. A homosexual and a good-looking teenager are cats and dogs. And this apparently involves thwarted sexual advances in the comfort room. A look into the hearts of a pair of old characters reveal checkered pasts, tinged with regrets and slight despair.

There are checkpoints, there are stopovers, there are drop-offs, along the way. But there are moments when the static nature of the mise-en-scene – mostly static framing of characters with just the dynamism of aural information – stagnates the flow of the film. Lao shifts gears with a song number, a chorus of the passengers with their teary-eyed plea for love or tenderness. Or understanding. I forget. Touching enough.

Biyaheng Lupa may not break new ground in film art, but there are few films that precede it in its use of the stream-of-consciousness as a narrative device. Fewer have even succeeded. Off-hand there are Resnais’s seminal Last Year at Marienbad and Gaspar Noe’s I Stand Alone, but Lao’s film can be said to be more ambitious. In his directorial debut, he attempts a subconscious portrait of an ensemble cast of characters. It takes some flair and some balls to even attempt it. And Lao has some success.

Biyaheng Lupa, in the end, however, is watered-down sociology, the sanitized fabric of the Filipino subconscious. The resulting portrait is not as raw, illogical and impressionistic as the Filipino psyche would have been. Still, this is one auspicious debut with moments of sheer cinematic beauty. Look for the butterfly floating through the bus, a lyrical moment that signals the uncertainty of this bus ride we call life.

Posted by Northern Portrait at 7:05 AM