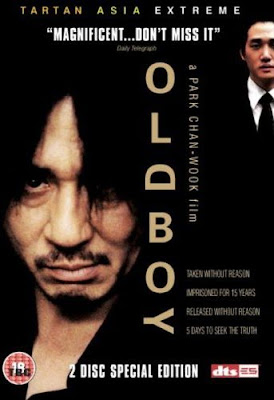 Nominated for the Golden Palm at in 2003 and settling for the Grand Prize of the Jury, Old Boy is supposed to be an exemplary piece of filmmaking – or at least one that reflects the festival’s long and hallowed tradition as the last bastion of art and non-commercial cinema. Old Boy might be a well-made film – an exemplary well-polished one – but its virtues end right there. When one strips away the clever plotting, its surprising twists and its shock effects, what’s left of Old Boy is little more than a retread of the revenge genre.

Old Boy proffers little food for thought. Here, however, revenge can be as sophisticated as it is envenomed – a revenge recollected in tranquility, a revenge constructed like a three-act drama. The object of this intricate vendetta is Oh Dae-su, a middle-aged family man, who is mysteriously kidnapped and imprisoned in a room for 15 years, framed as his wife’s murderer, and released just as mysteriously. All we are given to see is a short sequence as the film opens of Oh Dae-su at a police station, a boisterous man when he is drunk, and little else. Oh Dae-su, in turn, feels a blind fury against his mysterious jailer: what else consumes him but revenge? What he doesn’t realize is that the vendetta against him is just beginning, everything has been choreographed in advance, and he has no idea who is behind it, let alone the reasons for it.

Judging by this film alone, Park Chan-wook is a storyteller who knows his craft. He has adapted a popular manga with aplomb and made it his own. Old Boy, which also references classic literature like The Count of Monte Cristo, bristles with well-titrated doses of suspense, mystery, and action. Well-paced and incident-packed, it builds with a dramatic crescendo into a shocking climax.

Engrossing are the scenes in Oh Dae-su’s prison room where he is fed and groomed while he is sedated with Valium gas. Attempts at escape go nowhere (shades of Le Trou and A Man Escaped); television becomes his lone window on the world. He devotes much of his time to improving his fighting skills, which will serve him outside in good stead. Once released, Oh Dae-su searches in vain for his daughter, his one remaining family; but what fuels him is the search for his abductor, efforts that would prove bloody and violent. But the avenger’s identity soon becomes apparent. Meanwhile, Oh Dae-su has fallen in love with a young sushi cook named Mido, who looks strangely familiar.

Old Boy’s perverse insight into human nature is touched upon but unfortunately not sufficiently mined. Consuming oneself with visions of revenge may be unfortunate and self-destrucitve according to Sir Francis Bacon, but Old Boy imparts it another spin. Revenge can act as a raison d’etre for those who harbor it. It is a passion that can breathe life into men and in old Boy, it is an obsession that can keep one alive.

The failure of Old Boy is the lack of plausibility of the motive for revenge. The avenger’s identity comes out of left field, someone almost completely unknown. This is probably the fault of the original material that has been slavishly adapted. The reason for the revenge is ultimately juvenile, in more ways than one, and forfeits whatever chance Old Boy could have had in fashioning a modernist statement.

Old Boy, currently being remade by Steven Spielberg for 2010, is the film that burst the Korean New Wave bubble for me. If its triumph in will make it a long-term template for this nation’s cinema, one is better off looking elsewhere for non-commercial cinema. Meanwhile, Park Chan-wook is laughing his way to the bank, littering his wake with revenge films.

Posted by Northern Portrait at 10:49 AM